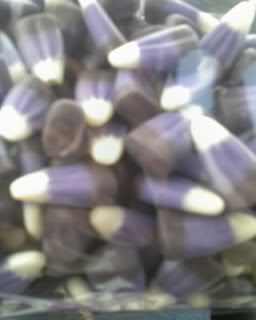 Who knew? I sure didn't, that is until yesterday =) I was cruising around Wal-Mart, getting in the way of workers who were trying to put out Halloween stuff when I passed the ISLES of candy. No kidding, there are about 5 ISLES of CANDY! It's insane. There's a lot of neat stuff this year, from something called "Bat Droppings" which look like chocolate balls and there are different flavors, to various large body parts (not the little gummy stuff) and even some neat Halloween trophies on which a skeleton is holding up a bag of candy =)

So, of course I couldn't leave empty handed! I started to go for my beloved mello-cream pumpkins (my Halloween fave since my kindergarden teach introduced me to them) when I saw, Gourmet Candy Corn... WOW! They were the same price as the mello-cream pumpkins, so I thought, "Why not!" and after looking over the various flavors which included: Pumpkin Spice, Caramal Apple, Creme Brulee and a few others that I forgot, I landed on the Blackberry Cobbler ones, which are white, lavender and purple =) Beautiful and very tasty! Let the teeth rotting begin!
Posted by Countess VonRauber (Heidi) at 7:19 AM