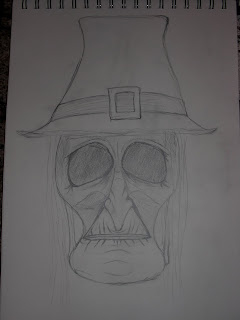 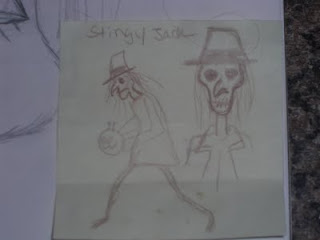 The ledgend of 'Stingy Jack' is a new legend to me. I love jack 'o lanterns and this year, I wanted to find out about their origins and how pumpkin carving became a Halloween tradition. Basically, the legend states that Jack was a 'stingy' man and got himself into trouble by tricking the devil twice and making a deal with him, that he would let him out of his imprisonment, only if he promised not to take Jack's soul when he died. When Jack did die, heaven did not allow him in, because he had been such a terrible person and the devil would not let him into hell, because he had promised Jack that he wouldn't take his soul. So, now Jack roams the earth, with a carved turnip, that contains an ember from hell, that the devil gave to him, to light his way on his lonley travels.
At first, I didn't really think too much of the ledgend, but when I started considering new characters for my cemetery, Jack was the most logical character that I could think of, to put in a haunted cemetery, that also contains many jack o' lanterns and two pumpkin headed scarecrows.
So, here's my first sketchs of Jack. I hope to get him completed for the 2010 Halloween season. I'm also hoping to make him my first prop with movement =)
Posted by Countess VonRauber (Heidi) at 8:55 AM