After discussing this past weekend's episode of Finding Bigfoot with a friend, we started talking about a local monster known as the Rougarou.

The Rourgarou, sometimes called the Loup-garou (french for werewolf) is a creature that is claimed to have a wolf's head on top of a human body. The legend was popular among the French-Acadian decendents (known as Cajuns) of Louisiana. Rumor has it, that the Rourgarou lurks in the backwoods and swamps of Louisiana.

Some of the Rougarou legends were used as tools to inspire obedience.  Cajun elders would tell the story of the Rougarou to the children, in order to keep them from staying outside too late or wandering too far from the house, for fear that the Rougarou would "get them"! Another fear inspiring variation of the legend claims that Catholics who did not follow the rules and traditions of Lent would be tracked down and killed by the Rougarou.  By the way, to any of my fellow Catholics out there, the Lenten season is upon us, so I wouldn't be eating meat on Sundays if I were you, unless you want to meet the untimely demise of an angry Rougarou!

Other stories describe the Rougarou as having werewolf like qualities.  These types of legends state that the Rougarou is actually a cursed human, that takes on a human form by day and the form of the Rougarou by night for 101 days.  At the end of the 101 days, the Rougarou must bite another human, thus transferring the curse from himself, to the victim.

Interestingly, the Audubon Zoo in my home town of New Orleans, has devoted a whole display to this creepy and elusive creature, in their Swamp Exhibit.  I remember approaching the exhibit with caution, as a child.  The creature was creepy, there were strange sounds coming from the exhibit and to top it off, skulls and children's shoes were scattered at it's feet. It fascinated and terrified me.  I couldn't take my eyes off of it.  I mean, it obviously ATE children!  Why else would children's shoes be lying at it's feet?  Unless it was some sort of weirdo monster that had a children's shoe fetish, but my young mind wasn't aware of that option, so being eaten by the thing was more likely than it just stealing my shoes.

Of course, the creature in the display is a paper mache looking creation, as the "real" Rougarou is so elusive, that one has never been contained. ;) It's construction reminds me very much of a homemade Halloween prop. The one that is currently on display is the 2nd one that I've seen in my life-time and a lot less scary than what I remember of the first one.  Every time I see it, I imagine redoing it and bringing it to the zoo to replace the one that's there now ;) That wold be a really cool contribution, basically paying homage to something that scared and intrigued me as a kid and I'm sure had something to do with my love of monsters today :) 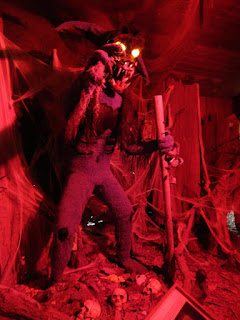 Posted by Countess VonRauber (Heidi) at 7:36 AM