Since we have so much new stuff going out into the yard this year, I thought it would be a good idea to start figuring out where all of the new things were going to go.

One by one, I put new pieces out, where I thought that they "fit" into the flow of the yard.

Here's the new monument.  It needs to be next to our cow skull scarecrow, b/c when all is said and done, it will run off of the same fog machine as the scarecrow :) 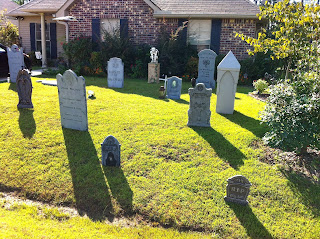 I also did a close up.  I'm SO excited with how great this thing looks from the view's stand point.  I cannot wait to get it finished and into the yard!!! 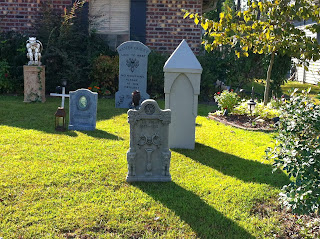 I put out the Raven Reaper's armature, next to Edgar's stone, seeing that Edgar's most famously known poem is about a raven, I thought that it was fitting.  I also put out the Fantasia ghost.... and saw that it needs a LOT of work.  Obviously, I need to change the drape that's on the front to black, but the arms need to be closer together, so that he doesn't look like he's performing a ballet pose.  AND he needs a longer PVC piece to be mounted on, so that he seems to hover over the ground, not be sitting on it. With that said, I'll have to put him back out there once I get the longer piece on, to gauge if he'll be obscuring the view of anything. 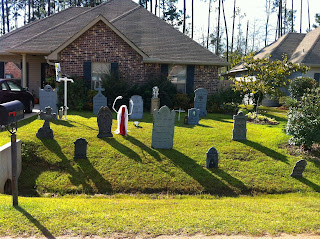 Last I have the obelisk.  Looks good there for now, but again, it will be taller than this once the base is added so, this is a "for now" position.  As you can see, I have a knack for putting my finger in the way when taking pictures... need to find better placement for that as well ;) lol 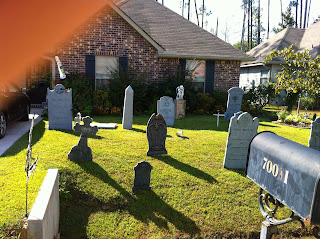 When all was said and done, and a I had run in and out of the house and from front to back yard, in 85 degree and HUMID weather, this is how I felt.  Where did all of our BEAUTIFUL weather go?!?! 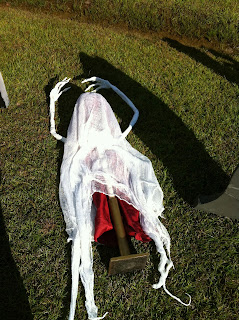 Hopefully, we'll be getting cooler temps again soon.
Until then, keep on haunting!
Off to paper mache and paint the afternoon away.
Happy Haunting everyone!
Don't forget... tonight, American Horror Story Coven premiers on FX @ 9:00PM Central!
Posted by Countess VonRauber (Heidi) at 1:51 PM