I'm finally getting back to my projects, after the busy 3 months that I've had. First thing on the agenda, my raven reaper. Remember this guy? 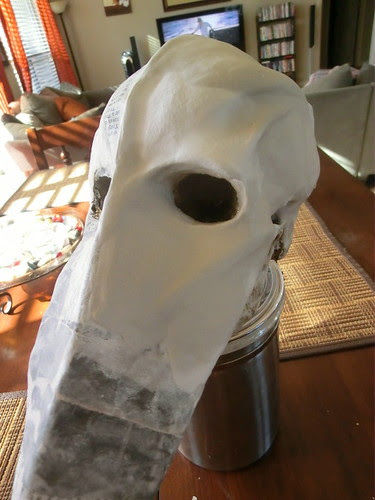 Being away from the project has given me a lot of time to think about the rest of his design and how I'm going to go about constructing him. Of course, as a reaper, I'll dress him in a long black cloak, but I wanted to give him more than just the ravenish skull to pull together the idea of the mix between raven and grim reaper. So, to really wrap my mind around this whole concept, I started thinking about the parallels between ravens and the grim reaper/angel of death. I'm more familure with grim reaper lore than raven lore and symbolism so, I started my research with the raven. Digging around looking for cultural stories of ravens has proven very interesting. I found that in Kwakwaka'wakw mythology, Gwaxwgwakwalanuksiwe' was a man-eating raven spirit, that was portrayed in some of their rituals...well, that's creepy. I also read that in Sweden, ravens are believed to be the ghosts of people who were murdered... wow, that's pretty creepy too! In Germany, it’s believed that ravens are souls of the damned! Yikes! Seems like I'm on the right track! I even read that some Native American groups believe that Ravens helped souls into the after-life... BINGO! In addition, Western cultures believe that Ravens are omens of ill or negative things to come, including death.
Once I realized that I'm on the right track with the concept, I started thinking about the physical attributes that could connect the two. I decided that wings would be the element to really mesh the two together. Wings can be seen on some images of reapers, such as "angels of death".
I also plan to give him the trademark sickle, which grim reapers are usually seen holding, but I'm also going to make an hourglass for him, to push forward the idea that "time is up".
The more that I develop a character in my mind, the better the concept comes through physically :)
I'm excited to really dive into this project now.

Construction pics to follow soon!
Posted by Countess VonRauber (Heidi) at 9:17 AM