Zombies have been quickly gaining increasing popularity over the past couple of years. So much so, that the zombie craze seems to be entering somewhat of an obsession or paranoia phase in our society.
The zombie obsession can be seen in the emergence of zombie movies, such as Zombieland, Resident Evil 1,2,3 and a proposed 4 and I am Legend, as well as mainstream  television shows.  The Walking Dead for instance, is heading into its 3rd season, with gaining popularity. But what happens when watching the action on television isn’t enough? What happens when you want to test your own endurance against the infected brain-crazed living dead?  You enter a zombie race.
is a type of capture the flag, meets warrior dash with zombies.  Participants run and endure a grueling series of obstacles (my personal favorite in the promotional video is the tank of blood colored water), all the while, trying to keep their flags from the greedy hands of waiting zombies.  Now I have to say, I don’t know what would be more fun, the adrenaline rush of running from zombies or signing up as a zombie volunteer J Check out the website for the list of towns that will be visiting.
If running a 5K race isn’t your thing, but you’d still like to be immersed in a zombie infested Apocalyptic world experience, you could always try Atlanta’s new haunt type of attraction, the Atlanta Zombie Apocalypse.  There are two ways to play, the first option is being lead through a course, the length of 3 city blocks, by “ex-military Zombie fighters”.  From reading the description of the course, which mentions climbing stairs, running, zombies, gore and gunfire, it seems that this attraction has the potential to be an intense experience.
The other option is participating in the Zombie Shoot Course, where paintball guns are provided for shooting "live un-dead zombies".
Opening day is set for September 30th of this year.
In the midst of all the zombie fun, there is also the paranoia of the end of the world, sparked by the other currently popular 2012 headliner, the Mayan calendar.  Since zombies and the end of the world seem to go hand and hand, it’s no wonder that people are getting jumpy about all of the media stories about people displaying “zombie-like” behavior.
The first story to break was that of Ronald Poppo who was viciously attacked by a man, who proceeded to chew on Poppo’s face.  The news report states that when confronted by law enforcement, the attacker growled at them, then continued to chew on Poppo. It was determined that “bath salts”, which were taken as a drug were the cause for the attacker’s bizarre behavior, not the fabled zombie virus.
Other stories of people biting and eating pieces of fellow humans cropped up in the weeks that followed, causing so much of a fuss that Center for Disease Control actually issued a statement to the Huffington Post denying the existence of zombies.
Even though the Center for Disease Control and Prevention declared that zombies and the zombie virus does not exist, they have certainly recognized that the zombie craze is alive and a great marketing tool.  They have used the zombie popularity to their advantage by launching their campaign, Preparedness 101: Zombie Apocalypse.  This campaign uses the obsession of preparing for a zombie apocalypse as a jumping board to educate the public about being prepared for actual natural disasters.  Amusingly enough, the preparations that some extremists have taken for the zombie apocalypse, such as finding shelter, hoarding weeks supplies of food and water, as well as stocking up on flashlights and batteries, are the same exact preparations that people should take for actual disasters.  I think that the CDC is insanely clever and has shown their great sense of humor by using this advertising technique to their advantage.
The Center for Disease Control is not the only one capitalizing on the zombie obsession.  Realtor.com devoted a blog entry to 16 pieces of Zombie proof real estate:Sixteen Fortresses for Staving-off the Zombie Apocalypse
Of course, you could always go the way of the old saying, “If you can’t beat ‘em, join ‘em!” by participating in a Zombie walk/crawl/parade/etc.  Zombie Walks & Parades, are organized to raise awareness about anything from world hunger to the opening of movies, to raising money for specific foundations: Zombie Walks
But, if you’re just looking to aimlessly shamble down the street in your finest zombie attire, and drink till you forget that you actually have a brain, then a zombie pub-crawl is the way to go.  Events with specific routes to popular bars in whatever town the crawl is going to take place in, are mapped out.  Participants are invited to come along, as long as they come as their zombie self.  Some that I have seen, ask the participants to really get into their characters by creating a back story, through their costume choice about where they were and what they were doing when they were infected by the zombie virus. 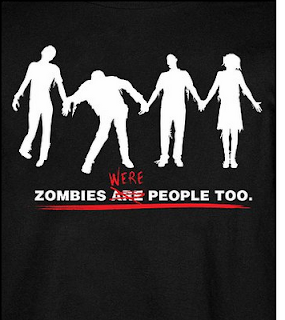 Image source: http://www.kaboodle.com/reviews/zombies-were-people-too-t-shirt--black
Posted by Countess VonRauber (Heidi) at 8:35 AM

Email ThisBlogThis!Share to TwitterShare to FacebookShare to Pinterest
Labels: zombies