Haunter Spotlight - The House of Marrow

Once again, Marrow, of The House of Marrow has "wowed" me to the point of having to spotlight him on my blog.

He was recently featured on Bloody-Disgusting.com for his short film, 'The Woods Themselves', which he entered into a contest for films that capture the essence of the 1981 movie, The Evil Dead.

His film is very cool and his prop that he created for it, is insanely impressive!  Did I mention that he's only 15 years old?  Yeah, this haunter/aspiring haunty film maker, is going to be wowing us for years to come :)

Check out his film here: http://marrowhouse.blogspot.com/2013/03/the-woods-themselves.html

And his feature in Bloody-Disgusting can be found by clicking the Blooding-Disgusting link that I provided above.

Here's a picture of his amazing prop.  I'm completely blown away :)  Congrats Marrow. 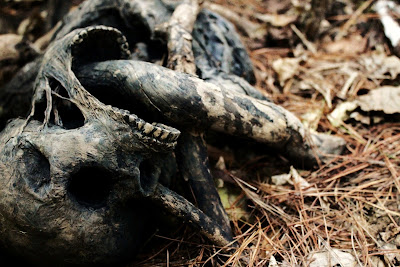 (Photo acquired from The House of Marrow blogspot)﻿

Happy Haunting!
Posted by Countess VonRauber (Heidi) at 5:56 AM