Since today is the first day of Passover, I figured I'd share what comes to mind when I think of Passover.

Every year for Easter, I watch the 1956 movie, The Ten Commandments. As a child, I was always fascinated by the story and horrified by the brutality and the plagues the movie portrayed.

For those who have never seen the movie, it’s about the Hebrew’s escape from slavery, by the Egyptians, via their leader, Moses.  It also portrays all of the religious miracles that helped aid in their escape.  Not all of the miracles were the warm-fuzzy feeling kind. As a matter of fact, most of the miraculous things that happen in this movie come in the form of plagues.

Of the 10 plagues that are documented in the bible, the movie portrayed 4, which were: water turning into blood,  a fiery hail storm, three days of darkness and the final, most terrifying plague, death to all of the first born in Egypt.

To avoid being succumbed by the angel of death, the Hebrews marked their door the blood of a spring lamb (which doesn’t work out very well for the poor lamb, I might add!).

The portrayal of this plague is the most spine chilling part of the movie.  As the Hebrews are preparing to for their first Passover of the angel of death, there is a shot of the night sky, with an eerie, green fog creeping slowly and menacingly, like skeletal fingers, across the screen. This green fog symbolizes the angel of death. 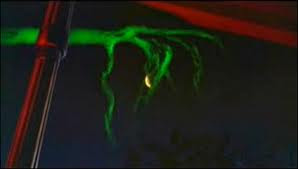 As it makes its way to the ground, it slowly crawls along the dusty streets and is followed by the moans and wailing of the families of the first born victims that it claims.  Only two deaths are actually shown and even though they are not bloody or overly dramatic, the angel of death fog and the fact that the Hebrews are shut up in their houses, just waiting for this thing to pass right out side of their doors, as they listen to the shrieks and moans of the dying, is fear and panic inducing! 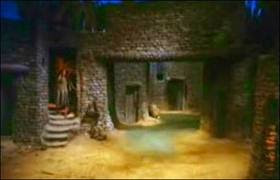 Now, I know that this movie was not intended as a horror movie, but admittedly, it deals with some frightening concepts.

As a kid, realizing that I was the first born in my family, the idea of this plague REALLY sunk in and made me wonder where the heck I could get the blood of a lamb, if ever this plague came to my neighborhood!

Check it out.  It's a great movie and it really is quite creepy :)