This must be the year of revamping props.  I've all ready given Jack a make-over, and now, I've decided that the countdown stone needed a make-over too.
The original countdown stone was made of plane old white Styrofoam.  I cut the numbers from some thin project board, which really was not the best material for an outdoor prop, as it is foam covered in paper.  The thinness of it is what attracted me to it, but after replacing the numbers last year, after having only used the stone the previous year, I was ready for a new more efficient design.  Also, the numbers were attached by thin strips of Velcro, which was always a bit of a pain to change every morning, in the dark, before I left for work.﻿ About a month ago, I was cruising the Internet and saw a small Halloween countdown, which was basically a stand with wooden blocks that displayed the numbers.  To change the amount of days left till Halloween, one would simply turn the block over to the correct number.  That one little countdown got my gears turning.  I had finally formulated an idea for my new countdown stone.
After a bit of figuring, I realized that the tombstone would have to be extremely thick to accommodate blocks.  So, I settled for making small panels with one number on each that could be fit snugly into a cut out on the tombstone. 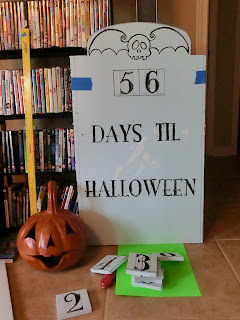 To make removal of the numbers easier, I cut a hole in the back of the stone, so that I can simply poke the numbers out.﻿ 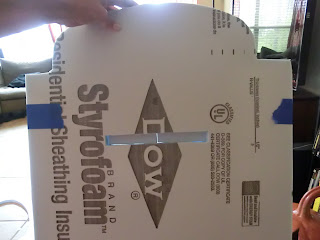 I only cut a small hole, so that the rest of the number would fit flush in the stone and not fall out the back of it.﻿ 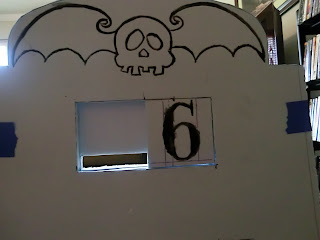 I also took a bit of artistic inspiration from my husband's Nightmare Before Christmas shirt that he was wearing on the day that I was working on the stone and carved the bat-winged skull on the top.  I love skulls with wings :)
This project was not "difficult", but it did require a bit of planning and a lot of measuring and re-measuring.  It was important to have the hole cut out straight and what I mean by straight, I mean that I had to make sure that I did not tilt the blade of my razor when I cut the hole out.  Also, I had to get the number panels cut out exactly too, so that they were big enough to fit snugly and small enough to fit at all :)
I'm very, very happy with the way that this turned out.  I cannot wait to paint it this weekend!
Be sure to check back to see the finished product!
﻿
Posted by Countess VonRauber (Heidi) at 7:41 AM