I am delighted to announce that I have been awarded the "Minions of Misery Award" by October Boy!  This is a really fun project that I think, not only exposes all of us to some cool movies and books of the Halloweenish/horror genre, but it also gives us a peek at what inspires us as haunter and lovers of Halloween :)

As a award recipient, I am to feature a dark book, a dark movie and a dark secret about myself.  I did a lot of thinking about this over the past few days so that I can give you guys some interesting stuff to check out, and I think that I've come up with some awesome offerings :)  I hope you enjoy! 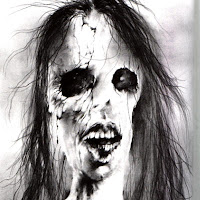 Scary Stories to Tell in the Dark; More Scary Stories to Tell in the Dark, and Scary Stories 3: More Tales to Chill Your Bones - written Alvin Schwartz and illustrated by Stephen Gammell.
As you can see, my selection is actually a series of 3 books.  These books were what my childhood scary story times were made of.  I don't know where we got these books, but they were legendary to all of the kids in my neighborhood.  We would actually sit in a dark room with a flashlight and we would take turns reading the stories out loud.  Some of the stories actually offered instructions to shout a certain line, take a dramatic pause or jump at the person/people that you were telling the story too.  We were awful at delivering these little extras, as we were all reading the stories for the first time together, but we had great fun doing it anyway :)


The stories are basically written versions of the scary stories that we heard for the first time somewhere in our grammar to middle school years. You know, the ones that a friend's older sibling said happened to someone they knew :)  "The Hook", "High Beams", and "The Girl Who Stood on a Grave", are all examples of such stories that I'm sure you have all heard a version of at some time or another.


Aside from the great stories, I would have to say that the illustrations were responsible for 50% of creep factor.  They are all black and white and very crude, but prefect... absolutely perfect!  The subjects look disturbing even if the story tells that they were harmless.  What our imaginations didn't conjure up, the illustrations by Stephen Gammell filled in.  I recently saw that there are some versions of the books that were illustrated by some one else.  The pictures are more cartoon-like and I find that it really softens the feel of the story that you are about to read.  I advise, that if you decide to pick these books up, that you get the version illustrated by Stephen Gammell. 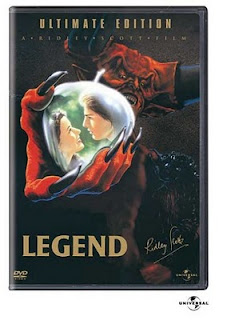 This movie completely fascinates me.  It is the epic battle between light and darkness.  Mia Sara, plays Lili, who is a princess that meets up with Tom Cruise's character, Jack, in an enchanted forest.  Jack serves as a symbol of nature, Earth and light.  Lili serves as the symbol of innocence.  Tim Curry plays Darkness otherwise referred to as Dark Lord by his creepy minions in the movie. Let me just say, that you will not recognize Tim Curry.  The costume that he is wearing is out of this world awesome.  I actually purchased a copy of the DVD with extra footage showing how the make-up and prosthetics were applied, which was very cool to see (there's my inner geek coming out).  He made a VERY convincing devil character.

When Lili ends up in Darkness's lair, she is enchanted by this beautiful, dancing, black dress which in a sense hypnotizes her and Lili magically ends up in the dress.  I WANT THIS DRESS :)  This is what fueled all of my Halloween costume dreams.  It is the ultimate "dark" attire.  Aside from that, the character who was the pinnacle of innocence, appears to become her total opposite, the pinnacle of darkness.  I have always felt that her transformation from innocent to dark, mirrors the transformation that we all make on Halloween night.  We all become something that we aren't.  We all get to play a different part, for one night...  then again, perhaps we are just showing for one night who we truly wish to be :)  (little epiphany there!).

Watching this movie is surely a Halloween tradition for me.  The story is haunting, the characters are haunting, the settings and the costumes are amazing.  Trust me, if you pick this one up, make sure that you get a copy that has behind the scenes footage.  You won't be disappointed!

I really had to think a while on this one, and I don't really consider this a dark secret, but it is an interesting a creepy factoid about me and my family.  Apparently,  having paranormal experiences runs in families and apparently, my family is quite sensitive to the paranormal.
I had always heard stories about my mom's "crazy" aunt who saw and communicated with ghosts.  She could actually see what kind of clothes they were wearing.  Every house that she moved into (she moved pretty often) she would encounter new ghosts. I was always very interested in these stories and wanted every detail.
I guess that I really started realizing that I was seeing things in my teens.  I would often see things out of my peripheral vision and usually in the hallway of my parents house.  Some times it was a white flash, sometimes it was a dark flash and sometimes I would get an "emotion" with the vision.

I started discussing these things with my immediate family and found out, to my amazement, that my dad and my brother had similar experiences.  My brother actually remembers seeing a dark figure sit on the end of his bed when he was young and thought that it was my mom, but said that one second "she" was there, and the next she was gone.  My dad told me that when my brother and I were young that my mom would be tucking us into bed or reading us a story in our room, as he was trying to go to sleep in their bedroom and he would experience the same bed vibrations that I had.  I still wonder who it was in that house that seemed to be a very maternal spirit.  I wish I knew.  Unfortunately, that house was destroyed in Hurricane Katrina.  I still catch glimpses of things from time to time and even my husband has admitted to seeing "things" around the house, but the activity is nothing like it was in my parents home.

There is more that I can tell, but I'm afraid that this entry has reached epic proportions all ready :)  I'll save my other ghost stories for another time ;)

So, there it is, my contributions to the Minions of Misery!  I hope that I have done it justice :)  I really, really enjoyed doing this!

I'll be making my selection of 3 bloggers to pass it on to over the weekend :)

Happy Haunting everyone!!!
Posted by Countess VonRauber (Heidi) at 6:05 AM

Email ThisBlogThis!Share to TwitterShare to FacebookShare to Pinterest
Labels: ghost stories, Legend, Minions of Misery, Scary Stories to Tell in the Dark